What Is an Interface?

As you've already learned, objects define their interaction with the outside world through the methods that they expose. Methods form the object's interface with the outside world; the buttons on the front of your television set, for example, are the interface between you and the electrical wiring on the other side of its plastic casing. You press the "power" button to turn the television on and off.

In its most common form, an interface is a group of related methods with empty bodies. A bicycle's behavior, if specified as an interface, might appear as follows:

To implement this interface, the name of your class would change (to a particular brand of bicycle, for example, such as ACMEBicycle), and you'd use the implements keyword in the class declaration:

Implementing an interface allows a class to become more formal about the behavior it promises to provide. Interfaces form a contract between the class and the outside world, and this contract is enforced at build time by the compiler. If your class claims to implement an interface, all methods defined by that interface must appear in its source code before the class will successfully compile.

But how do you get an object to do useful work for you? There needs to be a way to make a request of the object so that it will do something, such as complete a transaction, draw something on the screen, or turn on a switch. And each object can satisfy only certain requests. The requests you can make of an object are defined by its interface, and the type is what determines the interface. A simple example might be a representation of a light bulb: 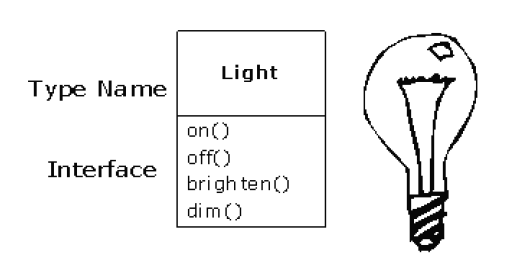 The interface determines the requests that you can make for a particular object. However, there must be code somewhere to satisfy that request. This, along with the hidden data, comprises the implementation. From a procedural programming standpoint, it’s not that complicated. A type has a method associated with each possible request, and when you make a particular request to an object, that method is called. This process is usually summarized by saying that you “send a message” (make a request) to an object, and the object figures out what to do with that message (it executes code).

Here, the name of the type/class is Light, the name of this particular Light object is lt, and the requests that you can make of a Light object are to turn it on, turn it off, make it brighter, or make it dimmer. You create a Light object by defining a “reference” (lt) for that object and calling new to request a new object of that type. To send a message to the object, you state the name of the object and connect it to the message request with a period (dot). From the standpoint of the user of a predefined class, that’s pretty much all there is to programming with objects.

The preceding diagram follows the format of the Unified Modeling Language (UML). Each class is represented by a box, with the type name in the top portion of the box, any data members that you care to describe in the middle portion of the box, and the methods (the functions that belong to this object, which receive any messages you send to that object) in the bottom portion of the box. Often, only the name of the class and the public methods are shown in UML design diagrams, so the middle portion is not shown, as in this case. If you’re only in the class name, then the bottom portion doesn’t need to be shown, either.