Since C passes arguments to functions by value, there is no direct way for the called function to alter a variable in the calling function. For instance, a sorting routine might exchange two out-of-order elements with a function called swap. It is not enough to write

where the swap function is defined as

Because of call by value, swap can’t affect the arguments a and b in the routine that called it. The function above only swaps copies of a and b.

Since the operator & produces the address of a variable, &a is a pointer to a. In swap itself, the parameters are declared to be pointers, and the operands are accessed indirectly through them. 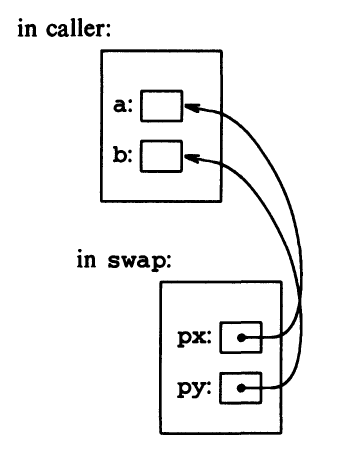 Pointer arguments enable a function to access and change objects in the function that called it.